skip to main | skip to sidebar

How Many Boats Did Franklin's Men Take?

The 105 Franklin survivors probably took a minimum of 4 boats when they deserted Erebus and Terror.

Boats found by searchers and Inuit:
This lower estimate of 4 boats is based on the seating room available in each boat (see diagram below). Dividing 105 people between four boats would put 26 in three boats and leave one boat with 27. Using only three boats would put 35 men in each boat. This may have been feasible but I believe such an arrangement would be viewed as dangerously overloaded. Taking 5 boats would assign 21 men to each.

More boats would result in fewer men to man-haul each boat. This deficit in manpower would be made worse if some of the survivors were too ill to help pull on the drag ropes. Therefore I believe it is unlikely the 105 survivors took more than 6 boats.

It is possible that a larger number of smaller boats were taken.

The seating diagram above is based on a drawing of a whale boat from the National Maritime Museum's website. For the model, the whale boat's beam was scaled up from 5.3-ft in the drawing to match the 7-ft 3-inches measurement given by McClintock. Each model sailor has a width of 18-inches and a total length of 24-inches. 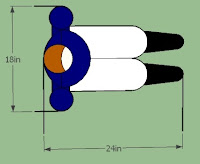